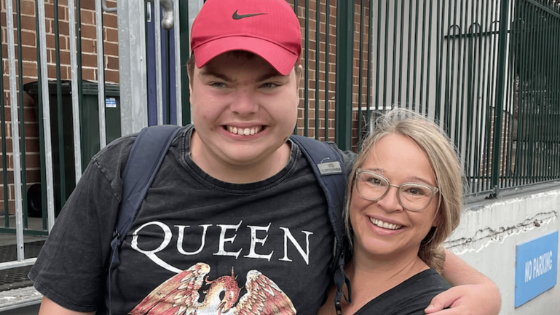 William is one of 164,000 people living with autism in Australia.

William's mum, Kate, was convinced he was deaf when he didn't respond to his name or other basic words at 15 months old. But a perfect hearing test result, and three months later, William was officially diagnosed with autism.

From the age of five, William became exceedingly challenging. He had a lot of trouble regulating his emotions — often displaying behaviours of concern such as physically hurting his siblings and others and inflicting injuries on himself. This extreme behaviour lasted for many years and was very isolating for the family.

Then from the age of 8, he developed seizures and was diagnosed with epilepsy. When he was 12, his mental health deteriorated to such an extent that he began to self-limit, refusing to get out of bed or even go to the bathroom. When he eventually refused all food, water, and epilepsy medication, he was taken to the hospital and placed on a drip.

Even though life with William was full of extremes and profoundly impacted the family, Kate always trusted that Jesus would care for him. And she held onto the hope that one day, William would come to know Christ.

'Kate longed for him to grow in his knowledge of God and have his faith nurtured in a meaningful way.'

And in a way, William was experiencing Jesus's love from those caring and loving him at church. But Kate believed there was more for William. Kate knew at church, William could be valued for who he was and be able to contribute his unique gifts (1Corinthians 12); since God's word is for everybody and God has a purpose for each of us, Kate longed for him to grow in his knowledge of God and have his faith nurtured in a meaningful way.

But William's attendance at church was getting increasingly difficult. He was now too old for the children's program, and after many years of being looked after by volunteers during the service, there was no one else who could take up the role. So, from about the age of 15, William began sitting through the service with his parents. Although engaged with the music, he was very bored the rest of the time and would rock and vocalise, and one time, even let out a scream! Kate knew she needed to take William to a group dedicated to sharing God's word to people with Intellectual Disabilities (ID).

William has now been attending Jesus Club Newtown for two years, and he finds joy in his relationships with others in the group. With resources specifically designed for people with ID, William's faith is nurtured and prayed for by his leaders and other club members. And he is learning more about Jesus and the Bible in a way he can understand.

William (far left) bowing his head, praying with others from Jesus Club Newtown

Over the past year, the pandemic has caused William much anxiety as it turned his familiar routines upside down. When the Newtown Jesus Club met via Zoom, William wanted to reach into the screen to be with them in person.

So when the group began to share prayer requests, the pandemic was weighing heavily on him. He kept vocalising - trying to communicate, and at first, it was hard to understand what was on his mind. However, after much perseverance from William, Kate, and others, the group finally understood - William wanted to ask God to end the pandemic!

Seeing his request written on the screen calmed him down instantly. When it was time for prayer, William bowed his head and joined the others in silence. For someone who constantly needed to self-soothe by rocking and vocalising, it was nothing short of a miracle for Kate to see William so focused — connecting with God, communicating in a way he couldn't in his everyday life.

'I came away so encouraged! It really was a "growth group", where the members encourage one another, read God's word together, and pray for one another!' - Kate